The team at Specialized Optical has extensive experience providing quality
care and treatments to our neighbors in Ogden, Utah.

Greg M. Wenom, O.D.
Doctor Wenom has practiced general optometry in Ogden, Utah since 1994. He has immensely enjoyed seeing patients in both a solo practice, and as an associate of Doctor Woodfield in his office during that time. Doctor Wenom has a great affinity for the outdoors, a love of Utah, and a deeply felt compassion and appreciation for his patients.

He received his professional training from the Indiana School of Optometry in Bloomington, Indiana, after graduating with a bachelor’s degree from Gannon University in Erie, Pennsylvania. Doctor Wenom completed a general internship session in Bloomington, and then another at the Indianapolis Eye Care Center, followed by an ocular disease focused tenure at The Eye Institute of Utah in Salt Lake City.

Dr. Dale Woodfield is an expert in the health 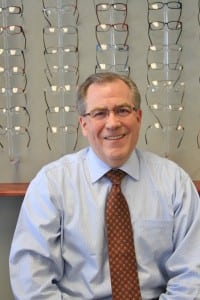 and treatment of the eyes. He has practiced general optometry in Ogden, Utah since 1985.

Dr. Woodfield is an attending optometrist at the Department of Veteran Affairs Medical Center (VA) in Salt Lake City, Utah. He instructs and mentors fourth year optometry interns and optometry residents at the VA. He is a member of the Utah Optometric Association (UOA) and the American Optometric Association. He has served as legislative chairman and Trustee on the UOA board. Dr. Woodfield is an Ogden native graduating with honors from Weber State College, and the Southern California College of Optometry.

Ross L. Clausse Optician,  Ross has been in the optical business since 1975. He is a resident of South Ogden.  He is extremely knowledgeable with all aspects of the optical industry. He is able to answer any optical questions you might have. He has the ability to make your glasses/sunglasses on site. He specializes in Silhouette drill mount frames.